Price: Starting from $7,999CAD Per Person

(Starting prices are per person, in double occupancy, based on a regular standard stateroom, and land-only.) 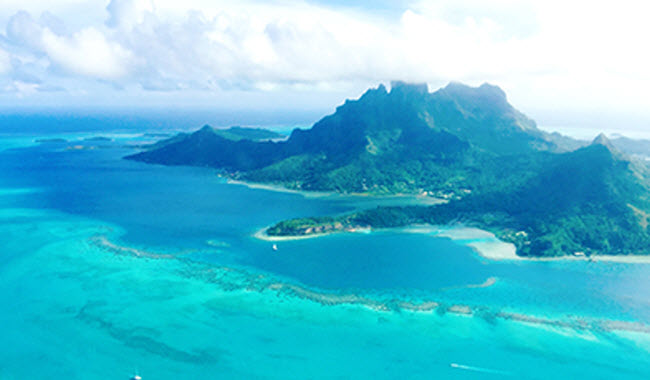 About a three-hour flight from the Society Islands and the Tuamotu Atolls, the Marquesas, or Henua Enata meaning “Land of Men”, are seemingly lost at the end of the earth.  Even now, some of the islands are virtually untouched since the era of European exploration. Their isolation has created an immense pride among the people and a fascinating culture. The language is unique to Tahiti, as the lilting Marquesan dialect is traced directly to the ancient Polynesian tongue of Maohi. Natural wonders abound as 1000-foot waterfalls cascade down sheer volcanic cliffs, and towering mountains disappear into the clouds. A Polynesian legend tells that the gods created the Marquesas Islands to be the roof of French Polynesia. On the Aranui voyages, we take travelers to the heart of Polynesian culture and traditions, to islands that have remained untouched and where time seems to have stopped. It is the journey of a lifetime. 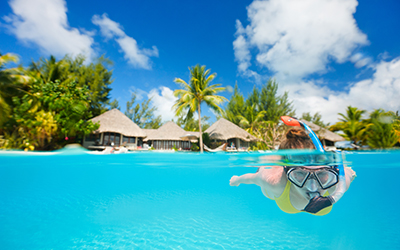 After collecting your luggage, you will be transferred to your hotel for your overnight accommodation.

Transfer in the afternoon to embark on the Aranui. Depart from Papeete, receive a warm welcome onboard from our crew and sail to the Tuamotu archipelago.

Surrounded by spectacular cliffs, rising 260 feet above sea level, this second largest raised atoll in French Polynesia is a sharp contrast from the typical low-lying corral-reef formation with a lagoon in the middle. It is also the only atoll in the Tuamotu with potable water which comes from its underground caves. Once a thriving island due to phosphate mining in the first half of the 20th century, it was mostly abandoned with only a few families remaining to keep watch. Today, the fewer than 100 inhabitants live from the culture of copra, fishing, and the trade of coconut crabs.

There are many ways to while away a day at sea on Aranui  from immersing in the Polynesian culture during workshops on weaving, dancing, cooking, wrapping a pareo, playing the ukulele, language, and even ‘tatau’ or relax on deck, in one of the bars, attend a lecture, browse the boutique, work out in the gym, be pampered In Aranui’s Polynesian spa, take a dip in the pool or just gaze out at the sea. When we arrive in the waters of the Marquesas, you will have to set your watches forward by half an hour.

Legend refers to Ua Pou as the “pillars of the archipelago” and it is often called “The Cathedral Island”. These names become clear as the ship docks at Hakahau Bay surrounded by 12 basalt summits soaring as high as 1100 metres. Every island has its own special ambience and Ua Pou’s is one of mystery and magic. You are sure to see familiar looking faces as many of our crew members are from here. Energetic early risers can hike up the hill to the Cross for breathtaking views of the valleys and village below. The artisans’ centre is a short stroll into town and the offerings include works featuring the unique flower stone and a variety of carvings and children’s clothes. Before enjoying a Marquesan lunch, take in an excellent dance show, including the Bird Dance, a traditional Ua Pou performance.

This island is the administrative centre of the Marquesas. The village of Taiohae stretches along the beach, which is like a magnificent amphitheatre created by the successive eruptions of three concentric volcanoes and dominated by towering cliffs streaked with waterfalls. In the small village, all the government services and residences, the hospital, bank and schools, are close by.  A lovely handicraft centre is located on the beach road. Your adventure in Nuku Hiva will include a tour of the Cathedral Notre Dame, famed for its stonework and wood sculptures. In Hatiheu, you will visit the archaeological site known as Tohua Kamuihei, where public festivities once took place. Here you will see the paepae, immense stone platforms on which houses were built, and huge boulders carved with enigmatic petroglyphs. Under a giant banyan tree, enjoy a performance of traditional songs and dances, including the “Pig Dance”, which originated in Nuku Hiva. For lunch, try a traditional “Umu”, a Marquesan specialty where food is cooked in an underground oven. 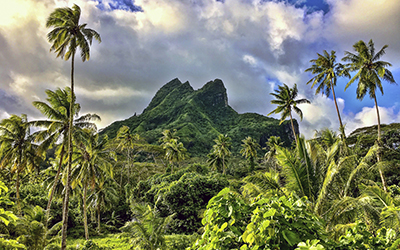 This island, the least inhabited in the Marquesas, is largely arid and home to many wild horses, goats and pigs. It is also a refuge for two endemic birds: the pati’oti’o and the pihiti, which are only found here. In the early morning, the Aranui will execute a point-to-point 180-degree turn in the narrow mouth of Vaipaee’s Invisible Bay. With only metres to spare on either side, it is a skillful operation undertaken by the captain and the crew and is not to be missed. From the dock, travel by 4WD to the village of Hane.  Along the way, you will stop to explore the Botanical Garden, the cultural centre Te Tumu, featuring a small museum with exquisite replicas of Marquesan artifacts, and a petroglyph museum and local woodcarvers’ studios in the fishing village of Hokatu. Look for the unusual carved black and white coconuts. In Hane, where a Marquesan lunch will be served, visit the Marine Museum beforehand and in the afternoon, hike to view red tuff tikis overlooking the bay.

Atuona, principal village of Hiva Oa and the second largest in the Marquesas, was once the capital of this archipelago. Sweeping views of the harbour can be seen after a walk up the hill to the cemetery where Paul Gauguin and Jacques Brel are buried. Explore the Gauguin Museum, a replica of his “House of Pleasure”, and the Brel Museum, which showcases his plane JoJo, which was often used for medical emergencies. After lunch onboard, enjoy a lazy afternoon on a beautiful white sand beach or take a refreshing dip in the Pacific Ocean.

A morning drive by 4WD takes you to Puamau to visit the most important local archeological site for tikis in French Polynesia. Our guides will show you through the mysterious ruins at Mea’e Iipona and share stories of these haunting statues and an ancient civilisation. In the afternoon, you will visit the impressive church of Tahuata which was built by the Vatican and decorated with beautiful carvings and a stained-glass window featuring the Marquesan cross. Though the smallest of the inhabited Marquesan islands, it is historically one of the richest. Tahuata has experienced it all — it was the first island in the archipelago to be discovered by Spanish explorers, who opened fire on a crowd of curious islanders in 1595, saw the arrival of missionaries in 1797 and then became the first French settlement in the Marquesas in 1842. The locals carve exquisite tikis, sea creatures, bracelets, necklaces and more from horse and cow bone, fossilised bone, tusks and pink helmet shell.

Fatu Hiva is the most lush and remote island in the archipelago, and is also a centre of Marquesan crafts. In the village of Omoa, women will demonstrate the making of tapa by hammering mulberry, banyan or breadfruit bark on a log. It is then dried and painted with traditional designs. Another demonstration will show the making of the kumuhei, a bouquet used by the local women to perfume their hair. The adjacent craft centre offers tapa, carvings, hand-dyed pareo and some of the finest monoi coconut oil found in these islands. Following the visit of the village, active passengers may choose to hike from Omoa to Hanavave, a 16 km hike offering spectacular views of towering cliffs. A picnic lunch will be served at the summit. Non-hikers will sail on the Aranui to Hanavave’s Bay of Virgins, considered one of the most beautiful bays in the world. Go ashore for a visit of the village and to welcome the hikers.

Enjoy a day at sea to relax by the pool and participate in one of the lectures or activities offered by our guides.

Rangiroa or “huge sky” is the largest atoll in French Polynesia and the second largest in the world. The seemingly endless blue lagoon attracts divers to snorkel, scuba or shoot the pass surrounded by fish of every size, colour, and shape. Rangiroa is famous for its majestic manta rays. It is also home to stunning pearls in all shades and local artisans known for their fine shell jewellery. While in Rangiroa, you will have the opportunity to enjoy the magnificent lagoon on a glass bottom boat tour or swimming, snorkelling, or diving. You can also visit one of the finest pearl farms in the Tuamotus to learn about these rare gems and see how they are grown.

After disembarking, you’ll be transferred to your hotel for your overnight stay.

Your French Polynesian experience comes to a close today as you transfer to the Airport for your flight home.

Starting prices are per person, in double occupancy, based on a regular standard stateroom, and LAND-ONLY. Not included: International and domestic flights, optional excursions, tips to hotel and cruise personnel, guides and drivers, beverages, and touristic tax in Papeete. $100 Early booking discount per person will be applied automatically at time of booking. Validity: Jan 11 - Feb 11, 2022 for travel anytime. PROMO: $250 USD Shipboard credit per person will be applied to the onboard account. Booking period: Jan 11 - Feb 11, 2022. Travel period: June 3 - August 24, 2022. Applicable on all cabin categories except Class C. The Onboard credit has no cash value, is not redeemable for cash, not transferable, and will expire if not used.

Enquire for the offer now!

FacebookTwitterEmail
* This offer is subject to availability and can be withdrawn or varied without notice.